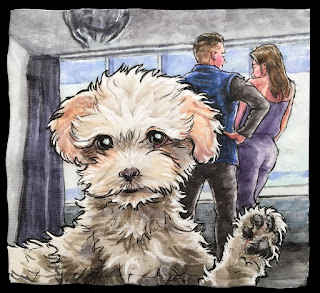 Dog with a Vlog:

Lance Stewart's new puppy Theo already has 285,000 followers on Instagram.
Perhaps Theo should have his own YouTube channel to let his viewers know HOW HE'LL PRANK THOSE HUMANS.

(We're working on a series of internet famous dogs on napkins for my seriously dog-deprived son.)

In hindsight, I think I was trying to tune out the fact that our sons were watching a good deal of "vlogs" by social media personalities like Lance Stewart.

You don't know who Lance Stewart is?
(I am looking at you, Grandma. Mostly because you are the only person who I can safely assume will be reading this)

Mr. Stewart is a social media personality who has accrued almost 3 million followers on YouTube with engaging content like "LIQUID ASS PRANK GONE TERRIBLY WRONG" and "MY GIRLFRIEND SHOWS HER NIPPLES ON CAMERA?!" He is by all accounts a millionaire at age 20.

The two vlog titles I have selected perhaps convey the wrong impression. Lance and his crew may be prurient, juvenile, and regressive on gender politics, but they are not terribly offensive. They shop at the mall, hang out at the gym, eat in restaurants and prank one another and their annoyed, but mostly compliant family members. And most importantly, they have a puppy.

From my curmudgeonly, geriatric perspective- as a person who grew up in the days when television and movies were scripted and performed by highly compensated professionals- this stuff is deeply, profoundly, and mind bogglingly, boring.

But Lance certainly does not care what I think. Nor do his millions of followers who can count both of my sons among their enthusiastic ranks.
Posted by ninalevy at 9:16 PM No comments: 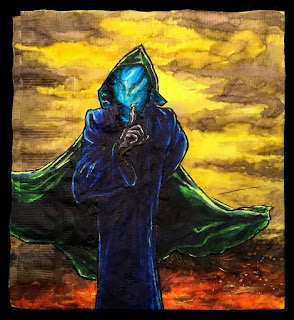 When bedtime is announced to our two sons, the real festivities commence. There are usually costumes and epic battles involved. This guy was based on one such bedtime get-up.

But no matter. Our sons intention was to invoke the mysterious and powerful sort of personage that I tried to capture here.

...the sort of personage who might appear in Dark Souls III.

Or who could easily vanquish a ten year old brother in glorious, heroic battle somewhere in the time between tooth brushing and changing into pajamas.
Posted by ninalevy at 9:32 PM No comments: 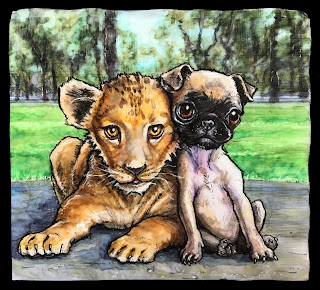 Two pets that my pet-deprived son would really like to have live at our house:

Guppy the pug of YouTube and instagram fame and/or a lion.
Equally impossible wishes for me to fulfill, but at least I drew them on a napkin.
Posted by ninalevy at 1:46 PM No comments: 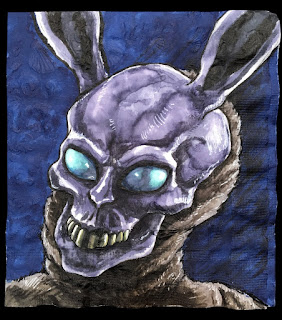 It's Easter, why are you wearing that stupid man suit?

I have very fond memories of "Donnie Darko," and have considered whether it might be a movie that my sons would enjoy watching. I revisited it on my iPhone a few months back and came to the conclusion that it would definitely appeal to them, but that, for a variety of reasons, they were still too young for it.

But they are not too young for creepy bunny images on Easter.
In fact, recently my younger son wanted me to buy him a scary bunny mask.
Once again, he gets the poor substitute of a napkin.
Posted by ninalevy at 4:49 PM No comments: 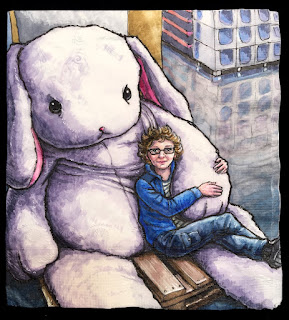 Our son saw a 93" stuffed bear, apparently available for sale at Costco on someone's YouTube vlog, and expressed the opinion that we definitely needed to buy one. He offered to store it in his room. I estimate that it would occupy about 33% of the space in there.

I am pretty sure that we are already overwhelmed by objects that are not exactly, as the famous Japanese declutterer Marie Kondo would say, "sparking joy." I have often joked, unhumorously while picking up the 15th Nerf weapon that I have tripped over during a day, that we are ready to appear on an episode of "Hoarders."

So, no giant styrofoam filled bear from Costco for my poor deprived son, despite the fact that it would definitely spark joy.

I drew him with a 93" Costco style stuffed bunny instead. (I don't think they have these for sale there, although my son tells me that there are other varieties of bear)

He was not impressed with the napkin alternative.
Posted by ninalevy at 12:35 PM No comments: 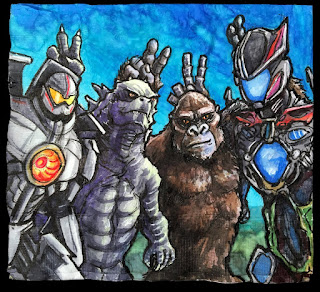 What do giant characters do when they hang out?

My sons are anticipating more movies and more team-ups between #megafauna #megazord and #megamech
Posted by ninalevy at 6:15 PM No comments:

Godzilla in the Kitchen 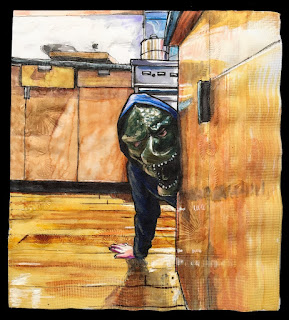 Sometimes I Scare Myself

We have a rubber Godzilla mask left over from last Halloween. It sees a bit of use now and then.
Our younger son was creeping around in the kitchen while wearing it, and there was something...well...quite creepy about the performance. I would not care to go to the kitchen in the middle of the night and spot that sort of thing peeking around the cabinets. He creeped himself out also, so to speak.

My son tells me that the reason that the Daily Napkins Instagram account loses dozens of followers a day is that, in addition to the napkins themselves, I don't post pictures of us just doing stuff. (I have other theories, but I will pass on them for now)

He makes this assessment based on his careful study of various YouTubers and their Instagram accounts. I don't follow these folks on either platform myself, but based on what I overhear during the videos, I gather there are a lot of "here we are at Walmart goofing off with the massage chairs" sort of images.

These Youtubers are celebrities (of a sort), and apparently people want to see pictures of their lunches or of them at Duane Reade, filling a prescription for Grandma. I am pretty certain this not the case for us. But my son hypothesizes that it might be otherwise.

So here is one of us is goofing off in the kitchen....on a napkin, wearing a mask.

I don't think it will solve our Instagram attrition problem. Not that maintaining our Instagram following should be a priority. Our previous popularity on Instagram was mostly accidental, and no doubt, undeserved.

And below is an image of my son inserting himself while I was trying to photograph the napkin with my phone, providing another Instagram worthy image. Sort of. I prefer not to post too many pictures of my kids' faces here on the blog, so he is obligingly covering himself up. 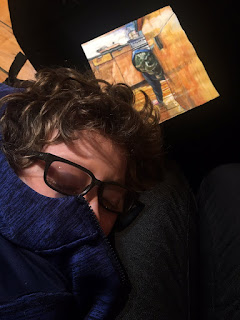 Posted by ninalevy at 9:03 PM No comments: 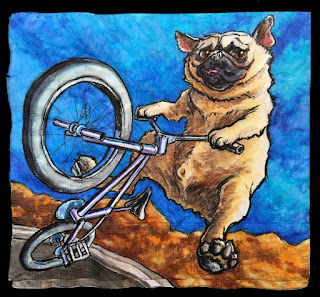 In honor of my canine deprived younger son and of the beginning of "Canine Fitness Month"-
Yes, I recently signed onto the email announcement list for the National Day Calendar Website. Apparently, they cover designated National Months as well.

Thus I have been made aware of important dates like "National Something on a Stick Day" and "National Decorating Month."

And it is April Fool's day. We did not need to receive an email to know that.
Posted by ninalevy at 7:31 PM No comments: