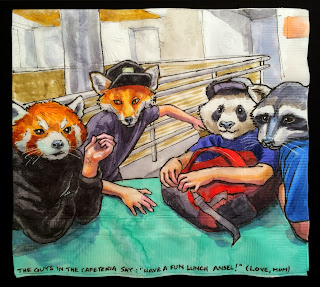 Who gets to be the fox?:
The cool guys hang out in the cafeteria before school.

Our younger son was using a photo app yesterday to put Panda face "stickers" on photos.  I gather there are several of these apps like Animal Face by Easy Tiger with various animals to choose from.

Before he went to bed last night, he had told me, "No more animal napkins, Mom! No more Pugs, and definitely no more Unicorns." But he did not have any requests for today's napkin, and sometimes, like my sons, I find negative direction hard to follow.

There are three classes within each grade at our kids' school, and this year all of my son's friends were assigned to one class without him.  He only gets to see them for the 15 or 20 minutes after we drop off his older brother and before the beginning of his school day.  This time is spent hanging out in the cafeteria and the surrounding hallways, getting away with as much rowdy and slightly nefarious behavior as possible.  On the somewhat rare occasions when the boys are sitting at a table together rather than running around or lurking in the bathroom, I try, often unsuccessfully, to get away with taking pictures of them.

Last night I used some of these snapshots as the basis for the animal head replacements in today's napkin.  I gave careful consideration to which animal head went with which boy... yes, these are the important thoughts that I am thinking late at night when I should be sleeping... My son's favorite animal is the Red Panda, so that was an obvious choice. The Fox went to a friend who is partial to wearing blingy metallic necklaces and gold high-tops. After the advent of Marvel's Rocket character,  a Raccoon face seemed like a safe bet for another friend.  And, well, someone had to be a Panda, so that went to a boy who had recently annoyed my son by spying on him in the bathroom.

I was pretty sure that this napkin would irritate my son, particularly after the "no more animals" injuction last night. I showed him a picture of it on my phone this morning so that he would be forewarned before he uncorked it at lunch. While he told me that he did not like the way I had drawn his hand, ("I don't ever hold my hand like that!") he was surprisingly pleased with the picture and proudly showed it to the other three boys. The usually photo-adverse kids even tried to recreate the picture at the cafeteria table.

There was, predictably, some griping about my animal choices. The Panda was not so pleased, and Raccoon boy told me that I had better draw him as a Fox next time.