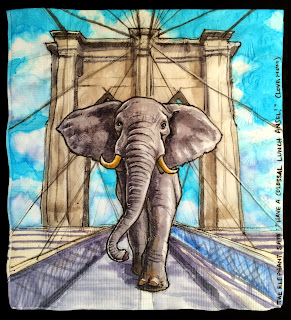 On May 17th, 1884, P.T. Barnum walked 21 elephants over the Brooklyn Bridge in a publicity stunt ostensibly designed to demonstrate the safety of the bridge. The bridge had already been open for a year at that point, but many people still had doubts about its stability.

This image was a late night, last ditch idea on my part. I had received a request from the boys that involved several Disney Infinity characters in a scenario that I could not quite get my mind around, much less draw... something about the "Gravity Falls" golf cart, and characters from "Big Hero Six" and "Guardians of the Galaxy" chasing and/or shooting at one another.

As challenging as I find the bridge to draw, it is easier than wrangling several characters with weapons and vehicles.
Posted by ninalevy at 2:04 PM