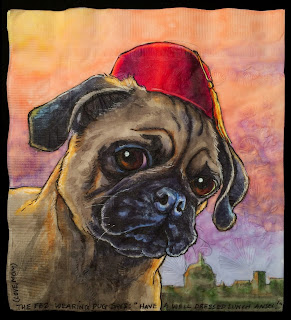 Canine ode to hats produced in pseudo-sweatshop conditions,
Or, The dangers of owning large amounts of red felt.

Our older son had a ridiculous school assignment over the weekend to produce 25 fezzes for a 6th grade Middle Eastern Bazaar.

I will admit that he had mentioned the impending fez disaster late last week, but I repressed the information until early Sunday morning.  It was perhaps unfortunate that we just happened to have all of the prerequisite materials readily on hand.  Inexplicably, I had been storing a large bolt of red felt for well over a decade... maybe just waiting for this very moment. The really remarkable thing was that I was able to find this bolt of red felt in my chronically disorganized studio at 7:30 am on Sunday morning while in a sleepy and increasingly pissed off haze.

The bright spot in the fez fabrication horror was that my husband put his shoulder to the parenting wheel and slaved away in our family fez sweatshop for a large portion of Sunday, thus saving me from total maternal martyrdom.  He wrangled the sewing machine and exhibited notable restraint as our mostly ungrateful and unmotivated son whined endlessly about how the project was keeping him from playing video games.

Some 23 fezzes in, our son said something about how he had volunteered to make hats because he thought that would be easier than preparing "weird food." His father wailed in dismay, "You mean we could have just made some hummus??!! Next time, chose the food, kid!" I suspect my son's fez selection had more to do with Doctor Who than any assessment of the relative ease of the project.

We ended up making 29 hats, because of course, both kids had to have one, and we couldn't seem to stop ourselves from making extras. I am afraid that I still have enough felt to make another hundred, but I'll just hold on to it for another decade or so.

And after a day spent wallowing in red felt, it seemed like the napkin had to have a fez also.
Perhaps it is the Doctor in his Pug form?

Email ThisBlogThis!Share to TwitterShare to FacebookShare to Pinterest
Labels: Ansel 2014-15, Doctor Who, Dogs, Not Trademarked, Pugs