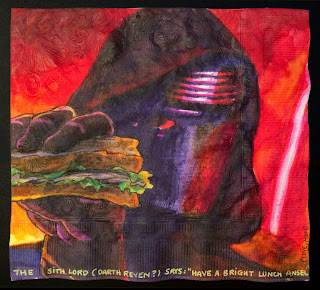 Bad Guys Eat Processed Meat and Gluten:
Happy "May the Fourth Be With You" (Star Wars) Day.

After several years of ambivalence about the Star Wars universe, my sons are getting pretty interested in the new helmet-wearing bad guy. He appears briefly in both of the trailers for the upcoming movie.

There is apparently some controversy in the Star Wars geek realm over whether this hooded/masked baddie might be Darth Revan. This Revan person hails from a popular video game "Knights of the Old Republic" and supposedly lived almost 4000 years before the events of the Star Wars movies.... (That's the year 3994 BBY in Star Wars speak, as in 3994 years Before the Battle of Yavin. Really.) One would have to theorize that the fellow has been preserved for thousands of years, delivered through a wormhole, or resurrected...or maybe, like Carrie Fisher, just offered a lot of money and strongly encouraged to lose 40 pounds....

At any rate, this mysterious Sith person has face obscuring headgear and the wacky new light saber, so my sons are ready to sign on.

(And on the napkin, he also apparently has a broken arm, given the awkward placement of the hand holding the sandwich.  And I spelled "Darth Revan wrong. It was late, and I was tired. I am sorry)Below is a screen  grab of the half second appearance in the second trailer: