Wicket the Ewok Rides a Dimorphodon 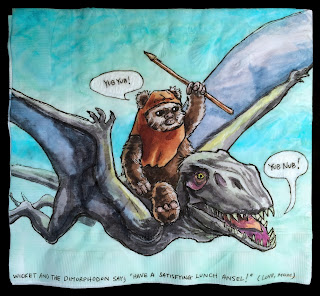 While we were discussing who should ride what next in the Star Wars/ Jurassic World series, the two kids ended up having a nasty little spat.  I was having trouble deciding who to put on the Mosasaurus, (the giant aquatic dinosaur who solves the Indominus Rex problem at the end of Jurassic World) so I suggested to them that maybe it should be an Ewok.

And of course if there is an Ewok anywhere, as far as my sons are concerned, it has to be saying "Yub Yub!" This idea of a napkin with an Ewok saying "Yub Yub!' was so entrancing that each of the two kids insisted that he had to have it. As usual, their logic was persuasive but contradictory.  The younger kid argued that the Star Wars Rides Dinos series was his, so he should have it. The older kid argued that it wasn't fair for his brother to have the whole series and that he should get to have at least one.

The situation started to devolve quickly, and since the kids were riding in the cargo bike at the time, I couldn't allow much pinching and poking to transpire without all of us ending up horizontal in the street.  I used my best "how to deal with toddlers squabbling over the same toy" tactic:  Rather than wisely mediating the conflict, I just introduced another variable: "So what do you think a Jawa should be riding when he says "Utinni!"?

The older kid was immediately mollified by the idea of having a Jawa saying "Utinni!" on his napkin.  While the younger one wanted that one too, he was satisfied with his ownership of the Ewok saying "YubYub!"

Crisis averted: everyone would have a drawing of a little creature saying some cute nonsense.  The dinosaurs were kind of beside the point.  Neither ended up on the Mosasaurus....I'm thinking maybe Emperor Palpatine....
Posted by ninalevy at 12:15 PM