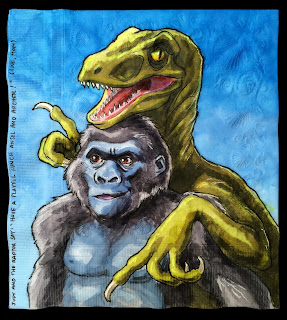 Last night we were catching up on "Paleontologists, Politicians and Prologue," the latest installment of Christopher Hastings' webcomic, Dr. McNinja.

The kids love the over-the-top randomness of many of the characters and events in the story.  The Doctor's secretary and driver is a large gorilla named Judy. Gordito, Dr. McNinja's 12 year old moustachioed sidekick, rides Yoshi the raptor.   When we came to an image of Judy the gorilla giving Yoshi the raptor a piggyback ride while he imitate Gordito, both kids said, "I want that on my napkin!"

I was just not capable of rendering the exaggerated facial expressions of both characters late last night.  The picture is a lot funnier in the comic.