Huggable from "Battle Bears" with the Empire State Building 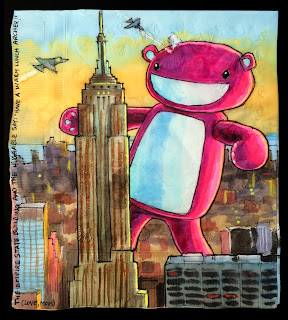 The kids are pretty excited about the upcoming movie "Pixels" where aliens attack earth using giant video games from the 1980's.

It seemed only fair to render some of their favorite video games on a colossal scale.
The "huggables"- as far as I understand it- are the nemesis of "Battle Bears," and their hugs are lethal.

I suggested that the bear should be going in for the clinch with the Statue of Liberty, but my older son thought that would be too unpatriotic.  I explained that the potential death toll would be far lower than that of the Empire State Building.  He was unconvinced.  I guess the Empire State is a more appropriate choice when it comes to giant monsters.

I'll admit, I was just trying to avoid having to draw the building and the cityscape around it.
Posted by ninalevy at 12:18 PM