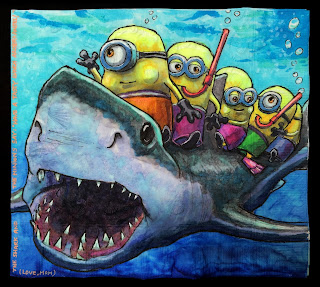 Since it also seems to be "Minions" week in advance of its opening on Friday, I thought a team-up was in order.  I addressed the napkin to both boys since it wasn't a  request, and I was not sure if either would be willing to take it for lunch.

While delighted by Sharks and Minions in general, the kids were not convinced by my Shark/Minions week napkin logic. They both took a back-up napkin to camp today instead.
Posted by ninalevy at 2:20 PM