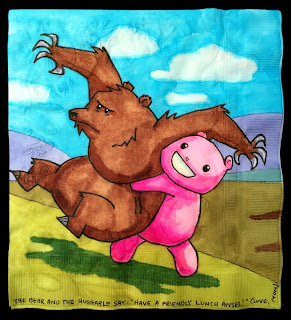 Our younger son has been watching the TV show "Total Drama Island" and its various iterations.  The Total Drama franchise is an animated parody of "Survivor" where a group of superficial fame seekers are tortured by a smarmy host while they struggle to not be voted off of the island.

I have to admit that my feelings about an 8 year old watching the show are mostly not positive.  It is a show about conniving adults and the nasty things they do to one another regarding sex, money and other body functions. The show's Wikipedia entry, however, notes that it was a very popular when it was first released, and that, "Many of the fans viewed the show as one of the best cartoons of its time."

Total Drama has a reoccuring bear character.  Our kids often exclaim over his cuteness, which perplexes me.

My son was very pleased with this napkin because I made it look just like the cartoony bear on the show....None of that nasty creative license that I sometimes indulge in on these napkins.
Posted by ninalevy at 11:39 AM