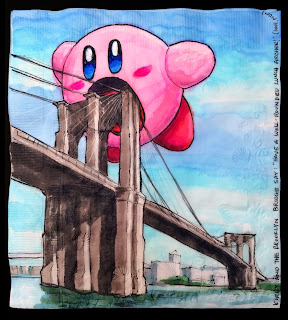 We were once again talking about the upcoming movie "Pixels," when my younger son suggested that we should do a napkin with a giant Kirby in New York.  The older brother said, "Yes! and he should be eating the Brooklyn Bridge!" This unfortunately touched off a volatile argument about who was going to take this hypothetical napkin the next day. Since the kids were, once again, sitting in the cargo bike on the way to camp, I did my best to come up with another equally desirable image for the non Kirby recipient before the situation devolved into something that threatened our forward progress.

Despite the fact that Kirby is one of Nintendo's most popular and iconic characters, I have managed to remain pretty ignorant about him.  I gather, however,  that he interacts with the world primarily by swallowing things.

The debate about who was going to take this napkin to camp continued right up until we left the apartment this morning.
Posted by ninalevy at 11:55 AM