Captain Rex and the Metriacanthosaurus 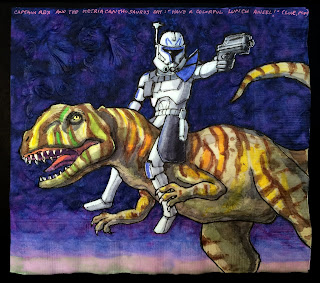 The Jurassic World website identifies the Metriacanthosaurus as a "fleet footed carnivore" that eats other dinosaurs and rates a "High" on the "aggression index."  I cannot say for certain, but I do not think this particular animal actually appears in the film.

Captain Rex, a character from the earlier Star Wars animated series "The Clone Wars," is certainly one of the kids' most favorite helmet wearing/weapon wielding guys.  There have been a couple of Halloween costumes and many hours of pretending here.

I thought Rex needed a feisty dinosaur, but I seemed to be running out of the obvious choices. The Metriacanthosaurus's name is a real mouthful, but I liked the stripes, and thought they went nicely with Captain Rex's hand painted clone armor.
Posted by ninalevy at 12:51 PM