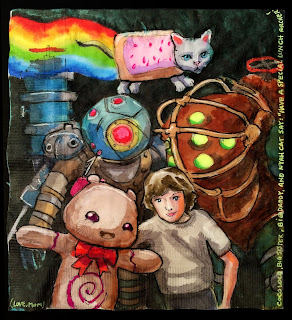 Too many characters assemble for the last day of camp.

After his brother asked for the "Huggable Army," my older son had to request multiple characters himself just to keep up.  I used to have a rule that I would draw no more than one or two characters per napkin....There was a good reason for that rule....

But it was the last day of camp, so I did my best to indulge.

If you are wondering about that pop-tart cart with the rainbow up at the top: Nyan Cat's
video (link to the original video) was one of the top five most viewed videos of 2011.  It has the insipidly cute- adult infuriating quality that our older son loves.
Posted by ninalevy at 11:30 AM