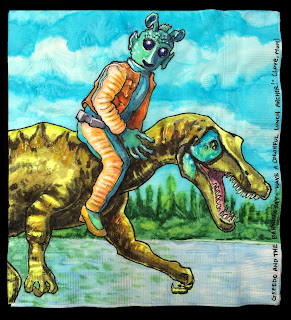 Our older son encouraged me to do a couple more Star Wars/Dinosaur napkins because I had missed two dinosaurs that uses in the LEGO Jurassic World game. I don't think the Baryonx actually appears in the movie,  It is represented on the Jurassic World website with some pictures that illustrate the very pretty markings on its skin.

I did pick Greedo mostly based on color...And maybe out of motherly perversity, as Greedo was sometimes played by a woman.  (Type "Greedo" into Google and it will prompt:  "Greedo was a woman")

Yes, I know Greedo the character was not really female.  The expanded universe stories and appearances in the prequel "The Phantom Menace" all indicate his maleness. But the old set photograph of the actress Maria de Aragon as Greedo sporting some nice color coordinated pumps while standing next to George Lucas was too much for me to pass up.

Perhaps Greedo would have been able to shoot Han Solo first if he had been wearing more sensible shoes. 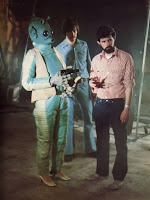