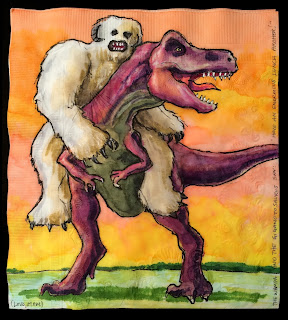 Sometimes when it comes to drawing or other art and crafts activities, the best results happen when you are not trying.  Sometimes all of the trying hard on other work pays off in a surprising way when a situation makes it impossible for you to give something the usual amount of time or focus.

Sadly, this is not one of these occasions.

If anyone cares, the Giganotosaurus species "included some of the largest known terrestrial carnivores." A Wampa is the monster that hangs Luke Skywalker upside down in an ice cave on Hoth at the beginning of "The Empire Strikes Back." But I can't imagine anyone reading this who is not already familiar with Wampas. (Except maybe my mother... Hi Mom!)

It was a bit of a running joke over the last couple of weeks: that if we did not come up with a good idea for a napkin before the kids went to sleep, someone was going to end up with a Wampa on a Dinosaur. Who knew that I was going to do such a poor job drawing the Wampa.

My apologies to Wampas, Giganotosaurs and their enthusiasts everywhere.
Posted by ninalevy at 10:55 AM