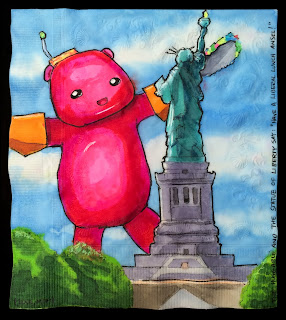 While my older son thought it would be unpatriotic to depict a giant teddy bear threatening the Statue of Liberty, his younger brother had no such reservation.

I have to admit that I am a bit unclear on the specifics of how the Huggables work.  I think that in the more recent iteration of the game, Battle Bears Gold, one can play as a Huggable.  In the earlier games, they are the antagonist.

There are multiple versions of the Huggables, but the clear winner seemed to be the one who sports rainbow tipped chainsaws.