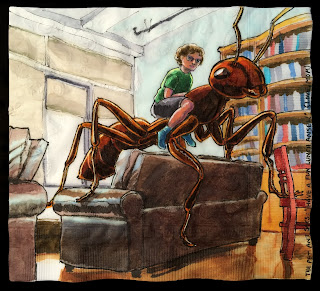 The kids' takeaway from seeing the "Ant Man" movie over the weekend was that they need a giant ant for a house pet.

As their father and I pointed out, they are already doing a fine job of feeding many pet ants already. Our apartment has old wooden factory floors with deep gaps between the boards which serve as excellent ant highways. Thus the ants rarely have to reveal themselves on their frequent trips to retrieve the many morsels of food that our kids courteously leave for them on the floor.  But make no mistake, they are there in full force.

In one of our kids' favorite scenes in the movie, the hero's cute daughter feeds the accidentally-enlarged dog-sized ant scraps from her plate under the dinner table. Nothing would please our kids more than passing off some brussel sprouts or kale to a cool pet.....except maybe climbing over the couch while riding on an even bigger pet.

Couch climbing is technically forbidden in our apartment, but it would be hard to argue with an ant who is big enough to be a cast member of the movie "THEM!"
Posted by ninalevy at 12:49 PM