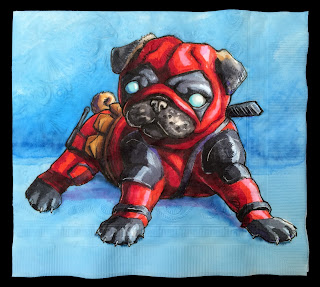 My sons want to see the Deadpool movie that opened yesterday almost as much as they want a puppy.

Sad to say, this napkin is the best I can do for the moment.

There is a "Dogpool" and a "Pandapool" among others in the rather extensive "Deadpool Corps" in the Marvel universe. But no image comes up when one googles for "Pugpool"...well, nothing beyond a pool for pugs anyway.  The web abhors a vacuum- particularly one that could be filled with a puppy wearing a superhero costume.

We had an extensive series of super dogs in mostly DC outfits back in 2013 when our younger son was suffering from more acute feelings of pet deprivation. You can see some of those napkins at this link. Or more exhaustively (63 napkins and counting) at this link
Posted by ninalevy at 6:01 PM