Deadpool with Waddles from Gravity Falls 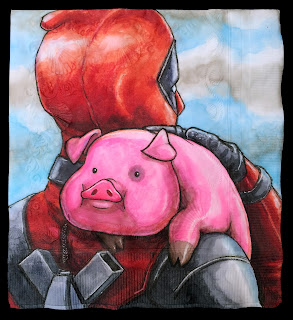 Two characters that our kids would like to see more of this month.

The final episode of the much beloved Disney series, Gravity Falls, "Weirdmageddon Part 3" is coming up on February 15th,  and of course, the Deadpool movie is going to be released later this week on February 12th. Fortunately, Gravity Falls is not rated R, so we should be able to watch that at least.

As previously mentioned here, we won't be seeing Deadpool for quite a while. We do own several Deadpool comic books that probably should not be in the hands of minors, but my threshold for potentially offensive materials in print form is much higher.

The kids felt quite strongly that Waddles the pig should have been dressed in a Deadpool suit on this napkin. (Pigpool... or Waddlespool?) They are big fans of the Deadpool animals like Pandapool that appear in "Deadpool Kills Deadpool"....and speaking of inappropriate materials: that book is emblazoned with "Parental Advisory: Not for Kids" right on the cover.

I just did not think I was up to stuffing Waddles into a Deadpool suit last night. And selfishly, I wanted to draw the pink and red combination of the two characters.

Perhaps more Deadpool Corps tomorrow.... I noticed while googling that there is plenty of imagery for "Dogpool" and "Pandapool," but nothing comes up for "Pigpool":

An unfulfilled online constituency.
Posted by ninalevy at 1:37 PM