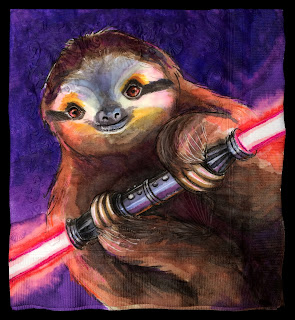 Star Wars and sloths continue to be hot topics at our house.
Really.

Our younger son is still working on his Sloth report at school. And last weekend we saw the vastly overpriced, but very gratifying for the kids, "Star Wars and the Power of Costume: The Exhibition" at the Times Square Discovery Center.

I had failed to draw a sloth holding a lightsaber on a previous napkin, so I had to remedy that oversight soon.

This was a late night slap-dash effort, done mostly with those nice toxic Xylene markers. I have tried to shift over to alcohol based markers as they are refillable and less of a health hazard.  But there are certain effects that are exclusive to the more solvent-y xylene markers... and that lovely intense purple does not seem to be available in the less toxic brands. I also have a nostalgic fondness for stinky art markers from watching (and smelling) my father use them for product design illustrations back in my early childhood. Or maybe I just like toxic materials. I spent almost two decades casting sculpture in polyester resin. Since becoming a parent, I have really made an effort to not wallow in solvents quite so often.  But this has absolutely nothing to do with Sloths or Star Wars.

Internet memes involving sloths seem to have peaked back in 2013, but they are definitely still around, including the truly awful "rape sloth" (I am not going to include a link to that one since my older son reads this blog: Hi Honey! please skip googling that one!) There is also the "astronaut sloth,"  and the more recent and unfortunately named "Slittens."

Another widely distributed internet sloth meme conveys the statement that sloths often fall out of trees because they mistake their own arms for tree branches.  While I do not have any firsthand information to contribute to this topic, it appears that the source of the sloth ineptitude rumor is actually just one comment in the satirical writing of Douglas Adams.

So....don't believe everything you see online: Sloths don't make rape threats or fall from trees because they cannot distinguish their own limbs from branches.

Sadly, nor do they wield double lightsabers.
Posted by ninalevy at 12:48 PM