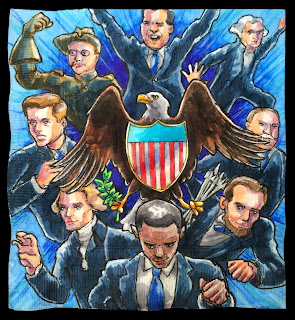 I asked the kids to name as many Presidents as they could to generate the cast of characters above.  (They also mentioned John Quincy Adams, but I did not manage to work him in.)

The composition is of course based on the Super Smash Bros Wii U case image.  I say "of course" for those who spend a lot of time looking at Nintendo game cases strewn on the floor in front of the TV.

My kids wanted me to draw the Presidents all playing in a Super Smash game. I told them it was unlikely that I was capable of pulling that off. I can barely watch a Super Smash Game without wanting to have a seizure, let alone play, or draw it.

Some of the choices here were obvious: Lincoln is in Link's spot, Taft is in for Kirby, Teddy Roosevelt for Donkey Kong, JFK for Princess Peach...

Or perhaps not. Maybe it makes no sense at all. 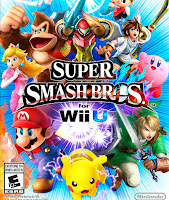