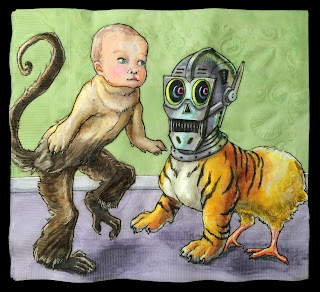 Okay, so maybe BabyPuppyMonkey is not more horrifying than PuppyMonkeyBaby after all.

I've done some more thinking about the triple hybrid genre suggested by the PuppyMonkeyBaby commercial. I think there needs to be a human, or at least human-like aspect, and the component nouns should all end in the long "e" sound. I spent a lot of time today baking and frosting cupcakes for my elder son's upcoming birthday, so I had too much time to consider this.

These rules do unfortunately result in the exclusion of the RobotTigerChick. In that case, we were just thinking of things that were cute or cool.

But there are lots of possibilities with ponies, Corgis, bumblebees, Yetis, duckies, guppies, combined with retirees, grannies, abductees, yuppies, jockeys or amputees...maybe with some shrubbery, pastry or Humvees mixed in.

The kids are not particularly impressed by this train of thought. They did, however, enjoy eating the extra cupcakes.