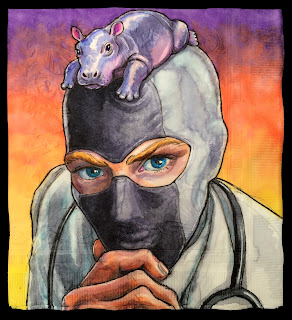 "America, do you not want tiny hippos?"

We caught up on one of the kids' favorite web comics, Christopher Hastings' Dr. McNinja last week.

The Doctor's nemesis, King Radical sees it as his mission to make the world more "radical." One of the improvements he offers is tiny pet hippos. I am going to resist the urge to explain that any further, as I won't have much success.

Speaking of lack of success...I foolishly thought a tiny hippo would make for a pleasantly easy drawing subject. There is something about this napkin that reminds me of drawings I might have made in say, sixth grade. Maybe there are several somethings. The rainbow background does come from the comic itself, but my 12 year old self would have been pretty enthusiastic about that as a background solution for almost any drawing. Dr. McNinja's eyes and eyebrows are often slightly oversized and expressive in the comic, but in this slightly more realistic context... well, they say preadolescent girl to me. And the mangled hand....And the purple hippo.

My younger son pronounced it "Weird. Just weird." Normally, I might not take that as a criticism, but here, I have to agree.