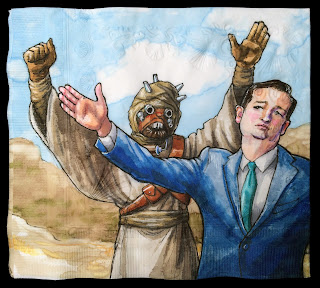 After the Iowa caucus, I gave some serious thought to what Star Wars character would go best with Senator Cruz.

I finally settled on a Sand Person because Ted Cruz is not a believer in climate change, and is strongly against gay marriage and a women's right to abortion. These seemed like positions that the Tusken Raider community could also embrace.
...particularly that bit on climate change denial, as Sand People are uniquely well prepared for an increasingly difficult environment.

As you may have already gathered, I am not a supporter of Ted Cruz, or the Republican party in general. However, I do try to accurately represent other points of view so that my kids can make up their own minds.

And if you are a supporter of Senator Cruz's presidential candidacy, do not think my choice of Star Wars character to be overly snide: My sons like the Sand People. And they are fun to draw.