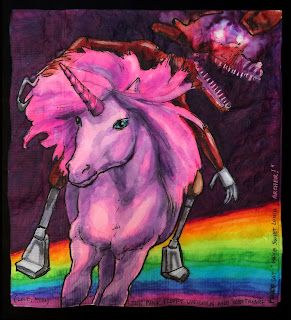 The Fifth Horseman of the Apocalypse?

(Yes, this combination was a specific request from my somewhat perverse older child.)

Apparently there is another iteration of the horror video game "Five Nights at Freddy's" (fnaf to the initiated) in the offing. And perhaps the murderous animatronic animals in the game have decomposed further. There is a picture of Foxy, one of these characters, circulating on the web,  which displays mostly glowing eyes and scary teeth.

The unicorn hails from "Pink Fluffy Unicorns Dancing on Rainbows."
If you have any interest in this song, you can read what little I discovered about it in a post from 2013 about a previous misguided pink fluffy unicorn napkin.

It might be best to stay away from the actual song, depending on your tolerance for slightly ironic insipidity.

Below is the "My Little Pony" version of the unicorn and the Foxy picture: 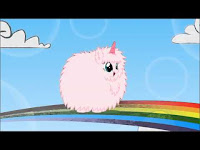