Sea Otter and Harry Houdini in front of the Brooklyn Bridge 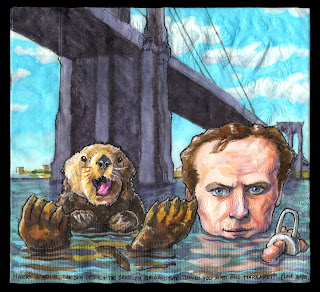 So long Second Grade....
One last image that doesn't make any sense without an explanation:

Our younger son is finishing up the school year tomorrow, and I am further behind than usual in figuring out how to express some small portion of the gratitude we feel towards his teachers and learning specialists.  Since I try to solve far too many problems by drawing on napkins, it is not a surprise that here we have a thank you napkin for his teachers.

In addition to the class study of the bridge, our son did his independent research projects on Sea Otters, Harry Houdini, and Jacob Lawrence. My apologies to Mr. Lawrence for not including him here. While Mr. Houdini was well known for jumping off bridges while handcuffed and generally submerging himself in water, I could not make any such argument for Mr. Lawrence. Perhaps he would not be sorry to skip being submerged in effigy in a toxic urban waterway.

As it is, both the bridge and Harry look a bit off.  My older son glanced at the napkin yesterday and said, "Whoa! What is going on with his head?!!" When I responded self-defensively that I didn't think it was a terrible likeness, he soothed me, "Ok, it's probably just that I am not used to seeing him in color." Yes, that must have been it.