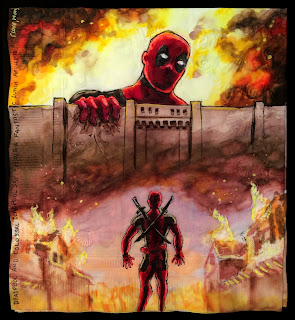 This image was a very specific request, as my older son is working on a short animation at summer camp which will feature this sort of Deadpool vs giant Deadpool scenario.

I suppose Wade Wilson has more than a little in common with the Titan Shifters of AoT.  They defy both the law of conservation of mass and basic logic in their ability to heal from any sort of physical abuse, resurrecting themselves and replacing body parts.

This fantasy of immortal bodies that can be regrown an infinite number of times is pretty compelling...particularly since the physical destruction can be grotesque and ridiculous without any permanent consequences.