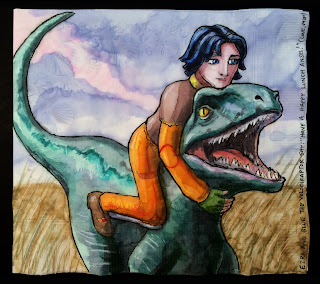 This is definitely the Velociraptor that you are looking for:
The kid with blue hair rides the blue raptor.

My younger son told me last night that "Star Wars Rebels characters riding Jurassic World dinosaurs is the thing that we are doing now."  Well, alright. Since Star Wars Jedis are supposedly able to use the "Jedi Mind Trick" to control animals, I guess this is as plausible as anything else that goes on here.

We are crossing corporate boundaries, however. My older son opined that perhaps a series of Star Wars and Jurassic World team ups might be a bad idea as it could encourage Disney to purchase the Jurassic Park franchise also. (Because these napkins are so very influential!) I explained that Jurassic World was a Universal property at the moment and was therefore probably safe from Disney.

Ezra, the teenage star of Rebels, was the obvious choice for the next napkin.  The kids debated who he should be riding, but I have to say that Blue from the "Raptor Squad" was really the only choice.

My son did not like Ezra's riding position. I did not bother to explain that I was trying to hide as much of his body as possible so I would not have to draw it.

This two napkins a night thing is definitely not going to work out.
Posted by ninalevy at 11:48 AM