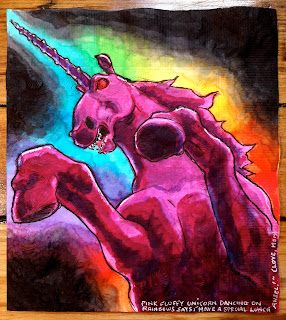 A friend introduced my older son to a Youtube video called "Pink Fluffy Unicorns Dancing On Rainbows."  You can see it here, but don't say that you were not warned...

This tune, and an attendant form of idiocy, became lodged in my children's and my brain.  Apparently we are not alone. There are ten hour versions of the video available online.

I can't really figure out the precise origins of this particular internet meme in the five minutes that I have allotted to write this blog post.  Perhaps this is a good thing.  The song seems to have been composed by a young man named Andrew Huang (over 4 million views on Youtube just for his video of this song) and may or may not have originally had anything to do with "My Little Pony" or "Dan Vs" (Dan is the gun wielding man wearing the "JERK" t-shirt in the video...if you made it that far)

I thought maybe an anti-cute pinkish unicorn rainbow thing would help evict this meme from all of our minds... Well, no, perhaps I didn't really think that was going to work.

I drew this between 1 am and 1:24 am this morning after I had spent several hours filling out mortgage application paperwork, so perhaps I was not truly responsible for my own actions.

Unsurprisingly, when I showed the napkin to him this morning, Ansel's response was a long bug-eyed silence.
Posted by ninalevy at 5:47 PM