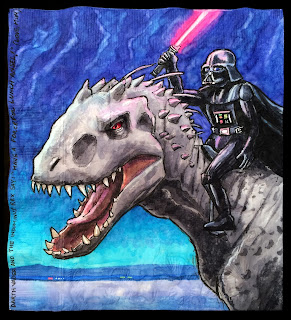 Don't underestimate the power of the dark side:

I did not have much success putting members of the cast of "Inside Out" on dinosaurs yesterday, but "Star Wars" characters seem to be another matter. The first new episode of "Star Wars Rebels" rolled out over the weekend, so the Sith Lord was an obvious choice for dino riding today.

I haven't had an opportunity to draw Darth Vader since my older son's obsession with "Star Wars" 7 or 8 years ago. I've missed the reflective possibilities in his helmet. Despite my parents' general polite lack of interest in Star Wars, they had a very realistic, wearable, Darth Vader helmet in their office since the early 80's. Perhaps my soft spot for the helmet really has more to do with that.

The Vader helmet attended a 5th birthday with Grandpa a few years ago: