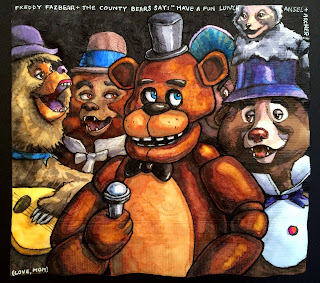 The godfathers of creepy animatronics back the present king of automatonophobia:

Our older son has been thinking a lot about the indie horror game "Five Nights at Freddy's" in which children's theme restaurant animatronics turn murderous. (Note that I did not write "playing," but instead, "thinking a lot about.") The player of the game is an overnight security guard terrorized by the pizza restaurant's automated animal characters who are trying to sneak up and kill him.

Perhaps there is something knocking around in the zeitgeist about scary animatronics. There was also a recent "Gravity Falls" episode ("Soos and the Real Girl") that included a frightening animatronic band in the colorfully named "Hoo-Ha Owl's Pizzamatronic Jamboree."

From my own 1970's Chicago childhood, I remember with some queasiness "Showbiz Pizza" which had a very creepy animatronic band called "The Rock-afire Explosion." I had assumed that Showbiz, and its later incarnations/spinoffs Chuck E. Cheese, were the source material for both "Five Nights at Freddy's" and "Hoo-Ha Owl's."

A recent trip to the Magic Kingdom (yes, we ventured into one of the lower circles of hell during winter break) reminded me that the real point of origin was probably Disney's "The Country Bear Jamboree." A "knee-slapping," "old fashioned hoe-down" with potentially racist and South-bashing overtones, the "Jamboree" has been at Disney World more or less since 1971. It was supposedly the last attraction specifically designed by Walt Disney himself before his death in 1966.

Since I have a personal interest in animatronics, (I'm working on a sculpture) I remorselessly forced the kids to visit the bear show while we were in Frontierland. Archer, fan of "Five Nights at Freddy's" that he is, was neither pleased, nor impressed.  Despite the mobs of holiday tourists outside, the show was quite lightly attended so it was a break from the overwhelming crowds everywhere else.

But you really don't need to sit too close to large automatronic bears who are singing charming songs like "Mama, Don't Whip Little Buford," or "If Ya Can't Bite, Don't Growl."