The napkins- along with the napkin recipients and napkin draw-er appeared on Good Day New York on Fox this morning.  Watch the video here:

I was a little apprehensive about the idea of live TV after the kids' less than enthusiastic response to the CBS camera crew last week, but they definitely rose to the occasion. We were slotted in between two spit polish members of the honor guard demonstrating how to fold the American flag, and several metrosexual men demonstrating how to wear shorts.

The producers has requested that I draw the hosts dressed as Superman and Wonder Woman. My kids wanted a large menacing teddy bear named Bobby from an old Teen Titans episode. Since the kids are in between school and camp today I was able to spend two napkins worth of time trying to get a reasonable likeness of Greg and Rosanna.  Results were poor, but they seemed happy with their super physiques.

I had much more success with Bobby. 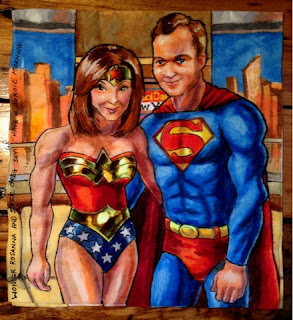