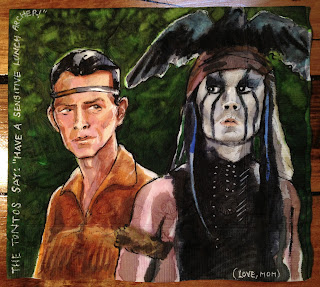 This morning I tried to convince Archer that Tonto was more the cool character rather than the Lone Ranger, but he wasn't having any.

He has spent the last couple of years in school studying Native American  cultures in the northeast and how the reality differed from media stereotypes.  But I don't think that applying that information to a Hollywood movie with that probably has cool gunfights is all that compelling for him right now.
Posted by ninalevy at 12:35 PM