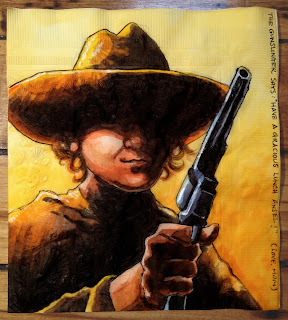 Ansel asked for a "gunslinger" for today.

I'm not sure exactly what the word means to him... beyond a guy with a gun and a hat.  Yesterday he put on a gunslinger costume that consisted of a plastic Indiana Jones hat (came with a foam whip that played the movie's theme song) and his older brother's Assassin's Creed III costume from last Halloween.

When I prodded him for more details on the Gunslinger's appearance- wondering if I should draw yesterday's getup, Ansel told me the most important thing was to see the hole on the end of his gun.

(This sort of unapologetic weapon display on a napkin would be unacceptable at his Quaker school, but we can get away with more at summer camp.)

I avoided the issue of the costume by cribbing from a variant cover of "Dark Tower: The Gunslinger Born" by Joe Quesada.  Although he usually hates it when I draw him, the fact that I made the face look a bit like Ansel himself was OK with him since it was mostly in shadow.