Silver and the Lone Rangers 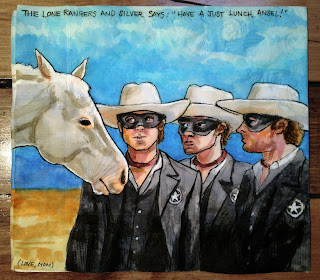 Ansel requested three Lone Rangers... and specified the 2013 version only.

He and his friends have been playing Lone Ranger at recess.  No one wants to be Tonto, or the brother, or the bad guys, so there have to be three masked men.

As of last week, I don't think any of these six year old boys had actually seen the current movie, or even the previous television series, which was no doubt just as well as far as their game was concerned.

Having seen the movie over the weekend- silly gratuitous violence, casual references to genocide and all- my inner six year old says the horse was the coolest character in the movie.

Email ThisBlogThis!Share to TwitterShare to FacebookShare to Pinterest
Labels: Ansel 2012-3, Movies, The Lone Ranger and Friends