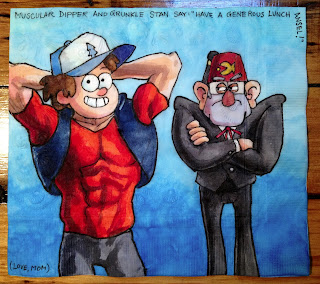 Yesterday we caught up on a couple of Gravity Falls episodes that we had missed.

Afterwards, Ansel requested a hugely muscular version of Dipper with a disgruntled Grunkle Stan looking at him from off to the side.  Well, he did not use the word "disgruntled" but that was definitely the sense.

I don't think this concept had anything specifically to do with the episodes that we watched, although I have to admit that I slept through most of the second one, so I can't be positive.

We did a similar napkin starring Teen Titans Robin back in May, and that might be the source.
Posted by ninalevy at 1:01 PM