Secret Agent Guy Who Is Not Tom Cruise 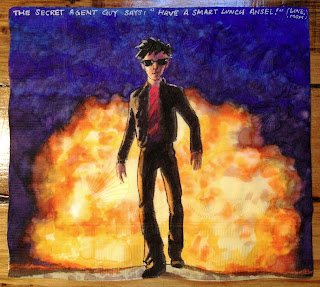 Ansel wanted me to put a guy that he has been drawing lately on today's napkin: a sort of Robinish person dressed in black with dark glasses that he calls the Secret Agent Guy.  He wanted me to work from one drawing in particular- a very large one done on a white board in our apartment.  He told me to be sure to add the sunglasses because he had mistakenly left them off because the hair was in the way.

I am not sure exactly what is going on with the second character on the right in his drawing.  I think he is a bad guy and that the stuff around his head is a result of receiving a punch from the Agent (stars and birds or such)  Is he farting an evil green fart also?  I did not ask.

My version ended up looking very Cruise/Mission Impossible, which was certainly not my goal.  I had briefly considered looking for something Mission Impossible like for the background, but instead borrowed the cliche macho action hero background explosion from Wolverine's movie.  Ansel does not even know of the existence of the MI movies yet, nor of Mr. Cruise for that matter. 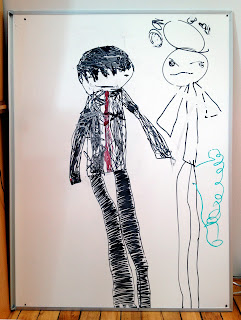 Email ThisBlogThis!Share to TwitterShare to FacebookShare to Pinterest
Labels: Ansel 2012-3, Explosion, Not Trademarked