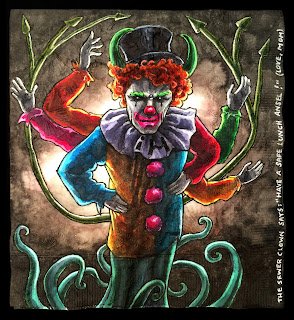 This  character was designed by our younger son for our still only hypothetical family webcomic. He recognized that we had a shortage of bad guys in the cast of characters. With a name like "Sewer Clown" and six arms, tentacles for legs and two multi-pronged tails, how could this guy not be creepy?

My son says that he had not heard of or seen the sewer occupying clown Pennywise from Stephen King's 1986 novel and subsequent TV miniseries "It."  I'm not entirely convinced that he wasn't exposed to a stray reference or image of King's sewer clown by his older brother who avidly and repeatedly watches YouTube videos like "The 100 best horror movie characters of all time." But maybe it's just that sewers and clowns go together so perfectly.

As you can see below, my son's original drawing is much better than mine. I was instructed to make the clown look realistic, because as my son told me, "That's your talent Mom, making things look more realistic."

I suspect realism isn't really the point with this guy. 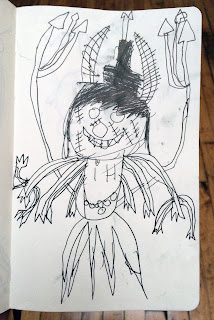