Cybil, the Homicidal Feline from Liō Comic, With Nerf Blaster 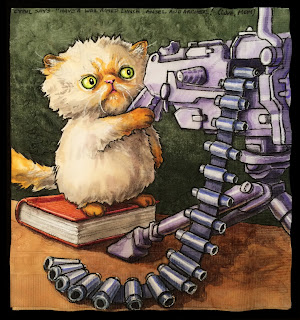 Killer Kitties agree, "It's Nerf, or nothing."

Our younger son was recently reminded how much he likes the cat in Mark Tatulli's Liō Comic. We were revisiting a previous Cybil napkin that is included in the show "Popular Monsters" at LIU.

While small, cute, furry things with weapons are always popular with our sons, I had not appreciated just how much the younger son liked this particular cat. In the comic, she is constantly up to no good, threatening the veterinarian with a hypodermic, wielding a grenade, various guns, or a chainsaw while wearing a hockey mask.

In this image, I was trying to top her previous napkin appearance where she was holding an axe. I considered arming her with some sort of a gatling gun (a favorite image at our house thanks perhaps to Axe Cop), but decided to draw a less dangerous Nerf weapon instead. I chose the Nerf Elite Vulcan / Havok Fire Blaster which might be the pinnacle of ridiculous foam dart weapons. It appears to retail on Amazon for the notable price of $450. I drew it in monochrome rather than the standard Nerf N-strike colors of bright orange and yellow for a slightly more menacing effect.

But if anyone is asking, it's a toy gun.  Cybil could no doubt do plenty of damage with just foam darts anyway.
Posted by ninalevy at 12:16 PM