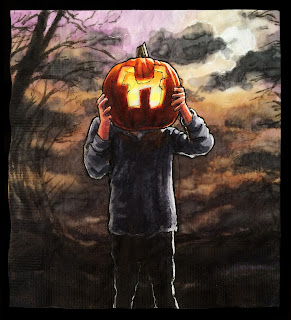 Jack O Lantern pumpkin head. He is a fearful sight:

We did finally get around to carving a pumpkin last night.  I did all of the messy excavation and removal of pumpkin guts, and left the design to my younger son. I think his concept might have some debt to Minecraft Creepers.

After roughing out the face, it quickly became clear that the whole point of this activity was the repeated and....can I say ironically, pointless, stabbing of the pumpkin with various sharp implements.
The cutting of the Jack O Lantern design in no way fulfilled this urge. The joy of inflicting additional meaningless damage seemed inexhaustible. As usual, impulsive destruction was so much more compelling than thoughtful creation.  Eventually, the pumpkin stabber had to be pulled away and made to go to bed.

Since we've been doing a series of photos of people posing with the sculpted heads from my "Popular Monsters" show, it seemed like a there ought to be a head substitution.  I was aiming for a Headless Horseman sort of backdrop.  I considered putting my son on a rearing horse, but just didn't have time to tangle with equine anatomy.

Most of the damage was on the back side of the pumpkin, and cannot really be appreciated in the photo below. 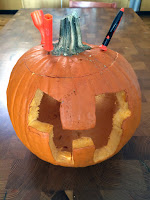