Godzilla and the Prom Queen: A Halloween Team-up 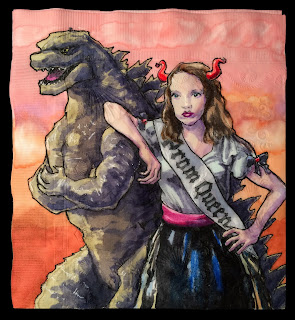 A close female friend of my older son describes her Halloween costume as a "Goth Prom Queen turned Demon."  As the parent of two sons, I must admit to being grateful that I have been able to remain blissfully ignorant of the complexities of female preteen Halloween costume choices.

I did not get to see my inflatable Godzilla son interact with the ironic prom queen at their Middle School Halloween dance last weekend, so I had to resort to imagining them together... sort of.

My depiction of her is not a particularly good likeness, but it is definitely more realistic than my drawing of my son's Godzilla costume.  For various reasons, we ended up with an adult sized costume.  Despite containing a slight 12 year old, it still inflated to its maximum volume, so the resulting height to width ratio was perhaps a bit peculiar... And not like that drawn on the napkin.

The photo below is of the 8 year old brother wearing the costume, so the height to width ratio is even more un Godzilla-like, but I am so amused by the tiny human toes peaking out of the feet, that I could not resist including it. 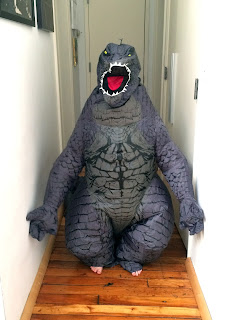