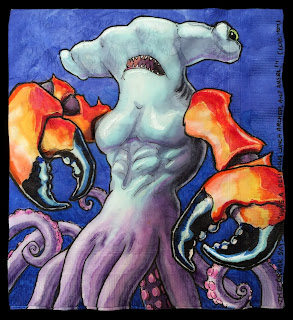 Beefcake with claws and tentacles:

Our kids really enjoyed Chris and Shane Houghton's comic series "Reed Gunther" about a bear-riding cowboy in an old west world populated by monsters like the tentacled Shark/Crab. Reed and friends encounter this last giant monster at the end of the first volume in front of the half finished installation of the Statue of Liberty. After a narrow escape by our heroes, the Crark ends up in the freshly poured cement foundation, presumably vanquished.... Although in a later panel, it appears to be waving its claws even after the Statue of Liberty's head has been dropped on top of it, so perhaps a future appearance in a sequel is a possibility.

Chris Houghton's drawings of the Crark in the comic are much more monstery and much less silly-beefcakey.  Somehow my default mode when drawing superheroes and monsters for my sons is always something with defined abdominal muscles.  Maybe this is because my younger son often specifies that there should be a "six-pack." Or maybe this says something unfortunate about me... In this case, I didn't do a very good job with those external obliques anyway, so perhaps a less hunky physique would have been better.

And, to make an uncomfortable admission, I debated about whether there should be nipples of some sort on this thing. "Nipple" does seem to be one of my sons' most favorite words lately. As in, one brother punches the other and then the punchee shrieks loudly, "Ow! My NIPPLE!" (This is to make everyone who does not have two small sons feel much better about their lot in life.)

I thought seriously about putting a strategically located starfish on each pectoral, but decided dealing with the fallout from my sons just wasn't worth it.
Posted by ninalevy at 5:27 PM