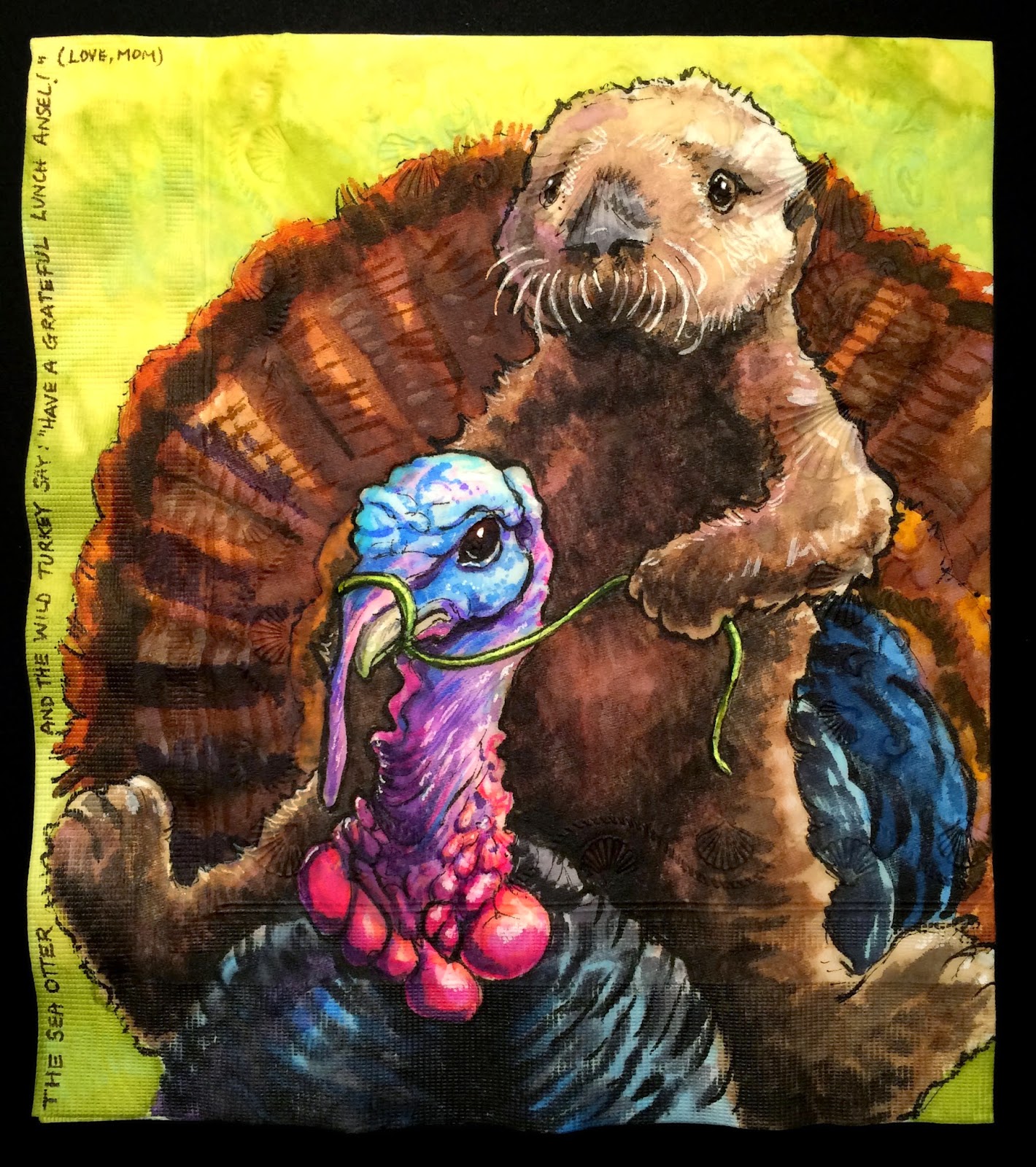 (I was mistaken yesterday, and there was in fact one more napkin-requiring school lunch this week before fall break.)

My younger son  told me last night that not one person in his class thought yesterday's "Turkeysaurus Rex" napkin was funny, and that everyone said it was just weird.  He did agree nonetheless that maybe we could try something else on the turkey theme...as long as there was also a Sea Otter involved.

I am always happy to draw something at least tangentially related to actual curriculum rather than trademarked characters that suggest that my kids watch too much television.  I don't, however,  get requests for school subject matter very often. In my younger son's case, I have to reach back to 2012, when he was studying Owls to come up with a series of school related napkins. (see the poorly photographed Owl napkins here)

Annoying mother that I am, I still frequently suggest school related napkins.  My kids' teachers always make a point to give me lots of positive reinforcement when my son shows up with a napkin that is about an edifying school topic. I am perhaps more responsive than my sons to praise from school authority figures.

Early on in the napkin project, my older son's Pre-K teacher took a hard line.  She told us that she was not going to read the text to him on any napkin unless the image was related to curriculum or at least portraying some other wholesome topic like real animals or plants: No Star Wars characters, even if Luke and Darth Vader were hugging and proclaiming the virtues of Quaker non violent conflict resolution.   This restriction of course only increased my son's determination that the napkins should havenothing to do with school. As it turned out, he was surreptitiously reading to himself, so he did not need her help with the text anyway.

Our younger child's teachers have been a bit more relaxed, and perhaps, as a result, he is less of a pop culture crusader

I had to go with a baby Otter for today's image, since it seemed too improbable to put a 70 pound, four foot tall adult animal on the back of a Turkey....unlike a pup, which is completely plausible astride a Wild Turkey....

(There is a now famous rescued Sea Otter Pup at the Shed Aquarium in Chicago which can be seen at great length online.  for instance:Sea Otter pup 681)
Posted by ninalevy at 11:34 AM