Skullcrusher from "How To Train Your Dragon 2" 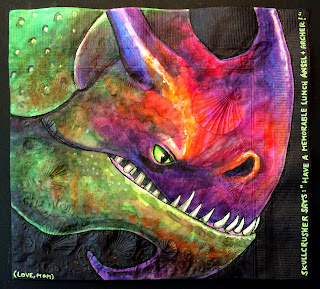 Going to see "How to Train Your Dragon 2" on Sunday was probably not my husband's first choice for a personally gratifying Father's Day, but he was a good sport and even stayed awake for the entire movie.

The movie made the kids more or less ecstatic.  They were able to mostly ignore the tragic demise of Hiccup's father, just as they had been able to overlook his previous lack of a mother.

I'll admit to being amused by the not-at-all-traditionally-maternal behavior of Hiccup's mother Valka. Having done the Viking equivalent of going to the corner to get milk and cigarettes, she chose to live alone in the company of dragons for 20 years without ever going back home to check on her son.  She was  apparently still more or less in the neighborhood with plenty of available transportation, so it was not for lack of opportunity. It's much more cliche absentee Dad behavior to disappear for decades and then reappear wearing a cool mask to claim significant influence over one's offspring after all of the hard work of parenting has already been done by someone else.

When I jokingly mentioned the advantages of Valka's parenting style to my sons, the younger one asked me, seemingly worried, if I would consider leaving him for 20 years to help dragons.  I told him it was a bit late for that, and fortunately, dragons don't really exist.
Posted by ninalevy at 1:45 PM

Email ThisBlogThis!Share to TwitterShare to FacebookShare to Pinterest
Labels: Ansel 2013-14, Archer, Dragons, Dreamworks Animation, How to Train Your Dragon