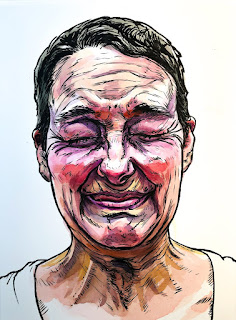 Even More Difficult And Uncomfortable Than It Looks:

Thinking about heads, portraiture and distortion always brings the work of Franz Xavier Messerschmidt to my mind. He was initially a rather traditionally inclined Austrian sculptor in  the mid to late 1700’s.

Near the end of his life, however, Messerschmidt produced a large series of peculiar “character heads” of men who faces were contorted in bizarre expressions. Facts are a bit inconclusive, but there is some evidence that these heads were not just exercises in idiosyncratic exaggeration, but were in fact driven by paranoia and hallucinations. He supposedly created the expressions by pinching himself under his ribs, and the heads somehow gained him protection from various spirits and “the god of proportion,” who tortured him at night.

These Messerschmidt busts are reproduced so frequently now that they almost seem commonplace...but while thinking about facial expression recently, I tried mimicking some of the expressions on my own face.

I had very little success. After a few minutes, I had a headache, and felt in danger of breaking a blood vessel somewhere. Perhaps my facial muscles need more exercise...certainly more decorative symmetry....but I don’t think that is something I can acquire.

But I did not try pinching myself under my ribs, or anywhere else, and the God of Proportion has always left me alone.
Posted by ninalevy at 5:09 PM

Email ThisBlogThis!Share to TwitterShare to FacebookShare to Pinterest
Labels: 2018-19, Inktober2018, Not a Napkin, Self Portraits, Watercolor