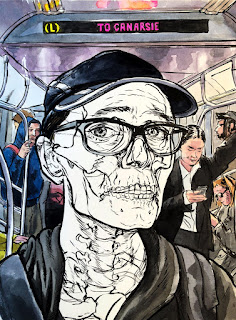 Regarding The Interior Critic;

I am always a little ambivalent about anatomical information. Sometimes the incomplete knowledge (it’s always incomplete unless one is an anatomy master, and there are very few of those) is more of a distraction and an impediment to careful observation.

I did study anatomy pretty attentively during college on my own and in an ecorché class at the New York Academy of Art. Sadly, I think I might have managed to forget most of it.

But...I do clearly remember an undergraduate class with the venerable Bernard Chaet. He was not a practitioner of anatomy as an end in itself, but he assigned projects where we had to draw skeletons into famous works of art. And he had us repeatedly draw self portraits.  These he would mercilessly correct in class, looking each student in the face while commenting on both our failures in drawing skill and physical attractiveness: For example: “you’re clearly misunderstood how to use perspective to render your face in a three quarter view...and your nose has a much larger lump on the end than you have drawn.”

I fear that Bernard Chaet would not be impressed with my Inktober Day 15 offering.

But he does continue to influence my drawing and sculpting still despite the passage of many years and his passing in 2012.

So perhaps this is a momento mori subway selfie?

That sounds pretty pretentious doesn’t it? I was really just trying to see if I could stuff a skull into my head on short notice. The answer was only sort of.
Posted by ninalevy at 5:06 PM

Email ThisBlogThis!Share to TwitterShare to FacebookShare to Pinterest
Labels: 2018-19, Inktober2018, Not a Napkin, Self Portraits, Skull, Watercolor