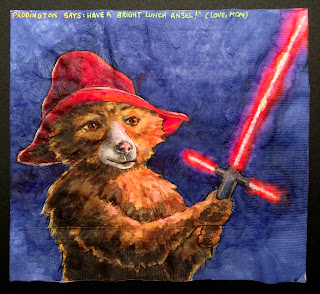 Movie trailers we are excited about: the delights of earwax and novel weapons

My younger son reminded me yesterday that he really wanted to see the movie about the bear and the toilet.  I am shamefully sleep deprived most of the time, so sometimes important things do go missing from my memory.  It took me several minutes to dredge up anything regarding a bear and toilet.  But yes, I did finally recall that we had seen the trailer for "Paddington" and that the bear did in fact put his head in a toilet.  He also put toothbrushes in his ears, tasted the resultant earwax, drank mouthwash, flooded a house, and most endearingly, rode an escalator holding a small dog.

How could we not pay money to see more of that?

Likewise, there is no way that we will  possibly be excused from seeing the next "Star Wars" installment. The new lightsaber was of course the highlight of that recently released  trailer as far as our sons were concerned. It is amazing how much excitement a couple of implausible horizontal protrusions can generate. (Here's a link if you are my mom or might have somehow managed to avoid seeing it already)
Posted by ninalevy at 8:51 AM