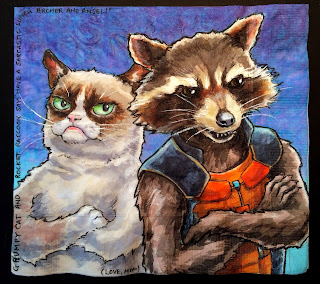 "Guardians of the Galaxy" opened last Friday, and seeing it over this weekend was not optional. It certainly lived up to its press as far as our sons were concerned.

That is to say: there was a snarky talking raccoon, and he did have a big gun. As a bonus: there were a lot of explosions and a dancing plant.  There was also a bunch of other stuff that prompted my younger son to plaintively ask several times, "when is this going to be over?" Nevertheless, by the dancing plant at the end, both kids were both ready for the sequel.

And Grumpy Cat? While the kids do find him amusing, I have to admit that he is more my fixation than theirs.  Why are sarcastic animals so appealing? And so lucrative?
Posted by ninalevy at 4:25 PM