That’s Not Michael Either 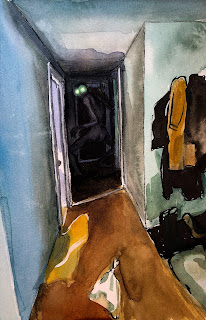 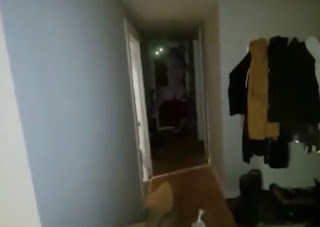 Our kids have always enjoyed a nice creepy image or a scary story.

In their younger years, the resulting exposure to scary stuff might have made it difficult to, say, go to the kitchen to get a glass of water when the lights were out. One never knows what horrors might lurk in one’s own domicile.

I have tried explaining that we are too far boring for Abominations to take an interest in. And hiding in dark corners waiting for a teenager to leave his room to go to the bathroom...that’s really dull stuff. Monsters have more interesting places to be.

But the very brief video clip known as “That’s Not Michael” definitely puts an amusing spin on the casual dismissal of horrors lurking in domestic spaces. The carrier of the video phone is walking around a cluttered basement looking for Michael. He looks down a dark hallway to see a very ominous, tall, naked figure squatting at the end, which turns to look over its shoulder at him with green glowing eyes. The narrator/ cameraman, comments dispassionately, “that’s not Michael” and moves on.

The figure at the end of the hall is mostly in shadow and mostly suggested, other than its glowing eyes.

It only took a couple of  google searches to come up with the author of the video, Zulubo Productions, and the “how to make a cursed video” / making of “that’s not Michael” video, which shows the very literal animated figure that he posed and placed at the end of the hall.

My son says that kind of spoiled his enjoyment of the video.  That plus a bad drawing, and my work for tonight is done.