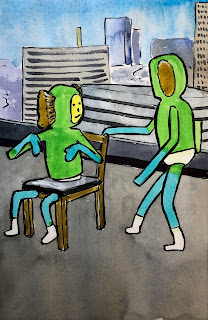 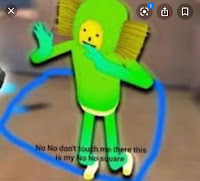 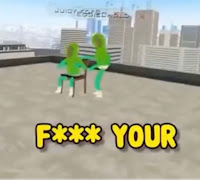 No No, Don’t Draw That There:

(Still lagging behind, I know)

As usual, this meme features the confluence of two things that I did not know anything about. Our son showed me a clip of a strange avatar with what appeared to be brushes protruding from his head. He is sitting (sort of, the rendering makes him part of the chair) on a rooftop, chanting, “No no, don’t touch me there. This is my no no square.”

A similar figure walks up to him and picks up his chair, screaming, “Fuck your No No Square!” and flings him off the roof.

Apparently the “No no Square” song was released in 2008 to work against sexual abuse- the square in question referring to a body area. It was repurposed by multiple TikTokers in 2012. This particular video comes from a bit recorded in VRChat, a free to play, massively multiplayer online virtual reality social platform (according to Wikipedia)

That information did not really help me to understand the appeal or the humor, but there it is.

Definitely an opportunity for proving that my drawing is no better than a crappy video still, though.